Excellent quality for a good price from Ukraine

Corde volante made of belt straps are straps that have a carabiner on both sides. The two ends of the same strap are attached at a distance from each other. It resembles the English letter “V” in shape. As a rule, the Corde volante consists of two such straps hanging in parallel.

The difference between Corde volante and aerial straps-loops:
Corde volante has split bindings, and the aerial-straps at the top joins into one bindings.

Advantages:
– Soft
– Durable (P \ n-1250 kg.)
– Wear-resistant
– Do not cut the skin
Tested and approved by professional Aerialists!
Technology:
The “eyelet” for which the aerial loop is attached to the swivel or carbine is sheathed in thick leather, which ensures:
– high wear resistance
– increases safety
– increases the service life of air loops.

Corde volante can be trimmed with velvet or cotton.
The standard colors are black and red.
This gives the props a more aesthetic and scenic look.

Thanks to this, we get a sufficiently soft and pleasant to the touch circus Corde volante, which is able to withstand heavy loads.
Tried and tested in practice by many Artists who were pleased with the purchase.
Attention! The price is for only one pair of loops with ring band.
Rigging set sold separately!

There are no reviews yet.

Only logged in customers who have purchased this product may leave a review. 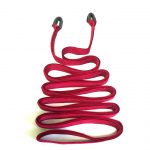