Excellent quality for a good price from Ukraine

The Oxan by Petzl is a high-strength steel carabiner designed for use in difficult environments.

The oval, symmetrical shape allows optimal loading of the carabiner when setting up anchors or connecting to metal structures.

Oxan can be connected to the CAPTIV bar to favour positioning of the carabiner along the major axis, to limit the risk of it flipping and to keep it integrated with the device.

This model offers the manual Screw-Lock with a red band that provides a visual warning when the carabiner is unlocked.

High-strength steel carabiner for use in harsh environments, particularly suitable for setting up anchors or for connecting to metal structures

May be used with a CAPTIV positioning bar to favor loading of the carabiner along the major axis, to keep it integrated with the device, and to limit the risk of it flipping

Keylock system to avoid any involuntary snagging of the carabiner

– 27 kN along the longitudinal axis

– 7 kN along the transverse axis

There are no reviews yet.

Only logged in customers who have purchased this product may leave a review. 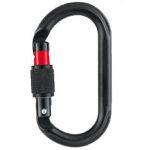